That first-sip feeling of a Moscow Mule is one like no other. Ginger beer, vodka and lime come together in a crisp and refreshing trifecta only made better by the rustic appeal of a hand-crafted copper mug. The traditional copper mug is designed with a brass handle and hammered finish to ensure that your Mule stays ice-cold (not that it’ll last long.)

Request a Quote for Your Custom Mugs

Since 2014, when a couple in search of the perfect copper mug decided they’d have to start their own company to get it, Copper Mug Co. has been delivering handcrafted genuine Copper Mugs to satisfied customers all over the country. Starting in California and now based in Denver, Copper Mug Co. remains committed to great design, quality product, and excellent customer service. With Copper Mug Co.’s lowest price guarantee, there is no better place to find custom copper mugs today. 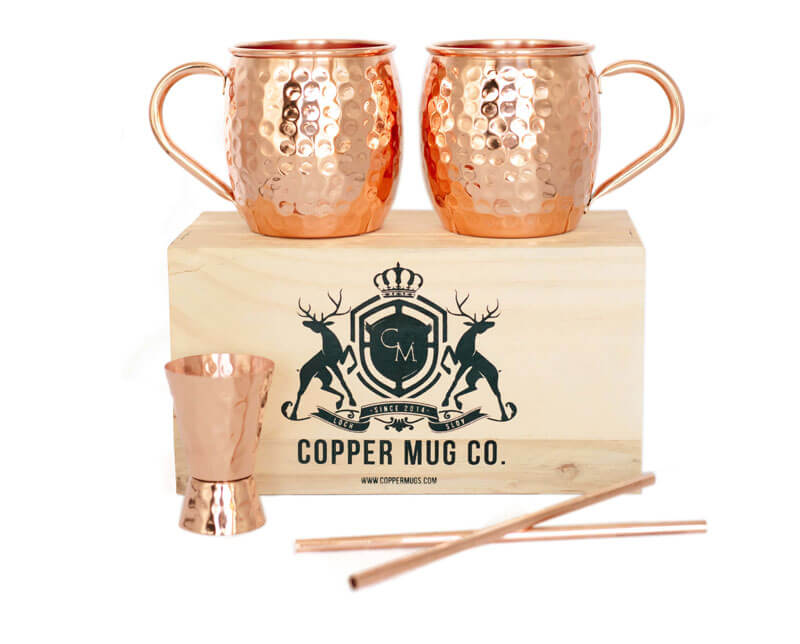 Everyone loved their favors

“Probably the easiest process of my wedding planning!”

I would HIGHLY recommend this company

“The mugs are beautiful and they’re “real deal,” unlike the lightweight, aluminum-lined “wannabe” mugs that you find elsewhere.”

“We now get to drink Moscow Mules out of these beautiful keepsakes forever… and so do our guests! Completely worth it!”

These were definitely worth the cost

“I wanted to find a wedding favor that our family and friends would want to take home with them at the end of the night. It turned out our mugs added a lovely element to our table settings!”

Product is great and people loved getting them as favors

“I needed extras very late in the process and they got them done for me and they arrived on time. I would definitely recommend purchasing from them.”

Ordered these copper mugs as a party favor

“They were great about solidifying a design and very open to input. They were fast, reliable, and a great quality.”

Our Most Popular Products

We take our design seriously on all our top-notch copper drinkware and barware. We use only 100 percent pure copper, not copper-plated stainless steel the way other companies do. Our copper mug handles are welded, not riveted, so your mug won’t ever leak. And our food-grade lacquer prevents tarnishing, ensuring a coppery shine that will last.

We Control the Manufacturing Process

Quality matters, so we don’t skimp. Rather than outsourcing manufacturing, we craft our own Moscow Mule mugs, leaving out the middleman and ensuring quality from initial design to customization to delivery.

Other companies cut corners by screen-printing their mugs, which washes off with time and use. Our engraving lasts forever. Whether you’re ordering for a restaurant, bar, special event, wedding, or retail, we’ll ensure that our mugs exceed your expectations.

What’s more, when you order in bulk (50+), we express our thanks by waiving extra fees on engraving.  That’s right. Every bulk order of 50 or more units comes with FREE engraving of your logo or message. No hidden costs. No set-up fee. No engraving fee. Just pure copper Moscow Mule mugs at the best prices around.

Not quite sure what you want? We’re standing by to help. Contact us and we’ll personally see to it that you get exactly what you need. We’ll work with you the whole way, from cup shape to engraving to shipment.

Truth be told, your bar deserves copper everything. Refresh your home bar’s copper collection with our list of the best Moscow Mule mugs this year.

See Our Picks for the Best Mule Mugs 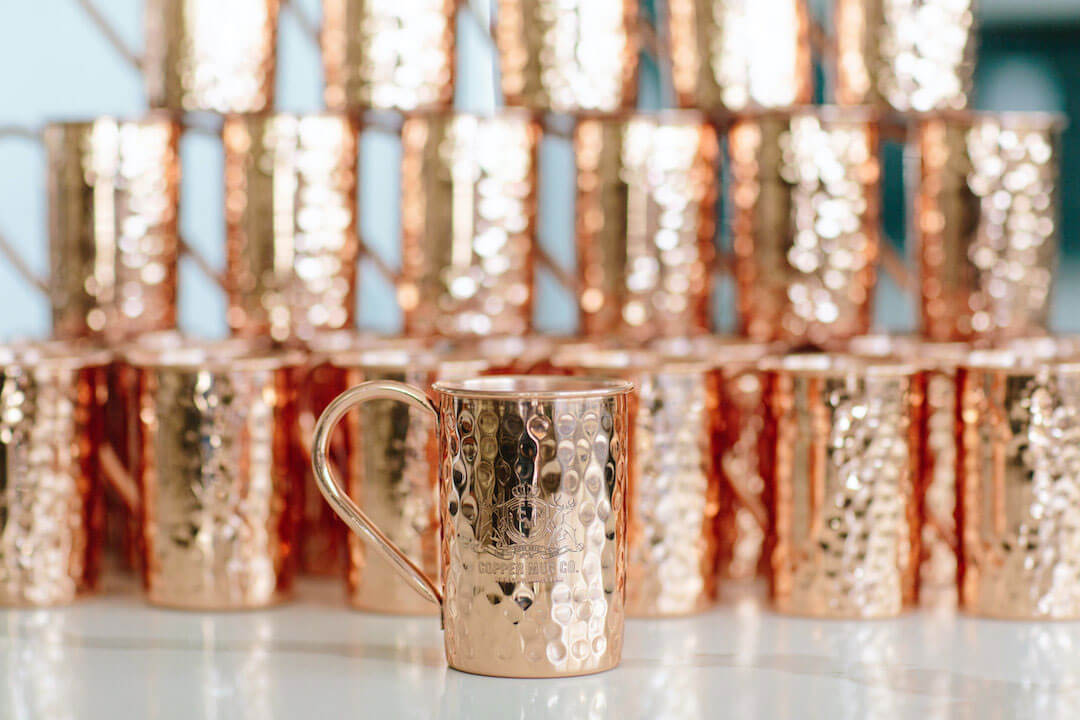 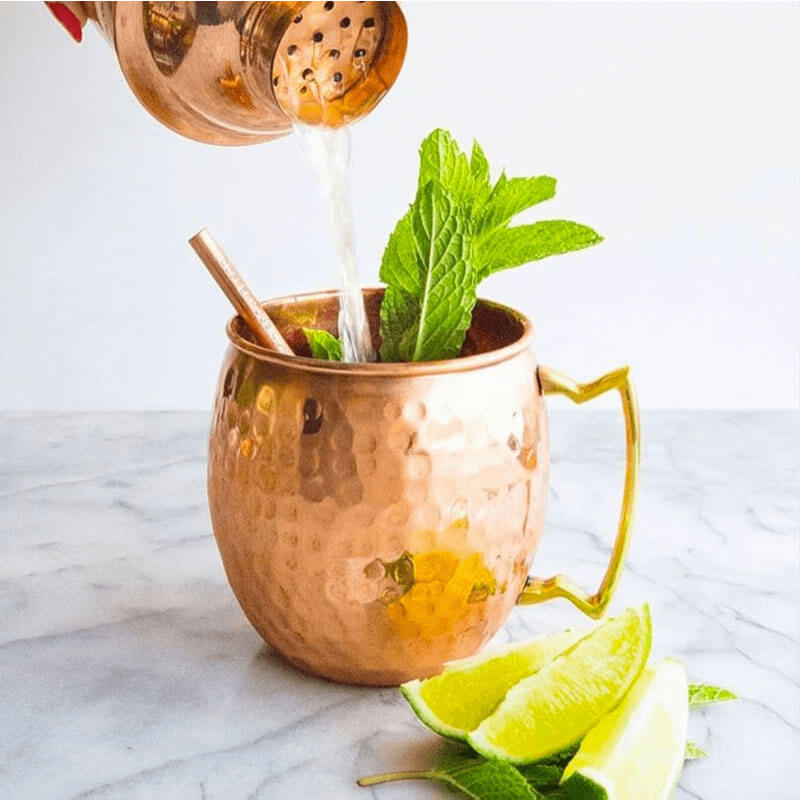 Check Out More Ways to Spice Up Your Moscow Mule

A Brief History of Copper Mugs & The Moscow Mule

The origin story of the Moscow Mule is colorful and distinctly American. Or stories, plural—more than one version is floating around. Both involve a couple of buddies named John and Jack, a bar…and a woman.

Hollywood, California, 1941. It’s smack in the middle of the Golden Age of Hollywood, on the Sunset Strip in sunny Los Angeles. One day, in his friend Jack Morgan’s Hollywood bar, the Cock’n Bull, successful importer John G. Martin was in the mood to complain. He’d purchased a then-unknown vodka distillery (a little company called Smirnoff), and he was lamenting his inability to unload the vodka. It just wasn’t selling, he said.

Still smarting from Prohibition, Americans were dearly devoted to their beer and whiskey. Vodka? Not so much.

Morgan, it turned out, was having the same issue trying to sell his ginger beer. Over hours of drinks, the two came up with a strategy: combine their beverages and sell it as one cocktail.

But what about the distinctive Moscow Mule copper mug the cocktail would become famous for?

That’s where the woman comes in.

Depending on which story you’re telling, it’s either Morgan’s girlfriend, Osalene Schmitt, whose family owned a copper mine, or Sophie Berenzinski, a Russian woman who had traveled to America expressly to offload the two thousand copper mugs her father’s copper factory had manufactured and couldn’t sell.

Each story ends the same, inside the smoky Cock’n Bull pub. Three people, three different problems, one solution: the dawn of a new cocktail that would incorporate all three elements: ginger beer, vodka, and the copper mug.

And the Moscow Mule was born.

Although the Moscow is the traditional mule, variations on the cocktail are endless. The base of the drink remains the same: lime and ginger beer. Creative bartenders substitute vodka with the spirit of their choice. From rum to tequila to gin to bourbon, a mule can be crafted to suit every taste.

Fill out the form below for a custom quote!
All inquiries receive a response within 4 business hours
(Monday – Friday 9am-4pm Mountain).

What to expect after submission:

Your personal customer service rep will guide you from order inquiry to delivery.
You’ll also receive a price quote, current lead time, and information on how to move forward with your order.

Get In Touch with Us

Get the latest news