Bulk, wholesale and 100% custom engraved copper mugs for the best prices on the market.

With its timeless look and incredible insulating properties, copper mugs continue to be the ideal drinkware for experienced drinkers all over the world. 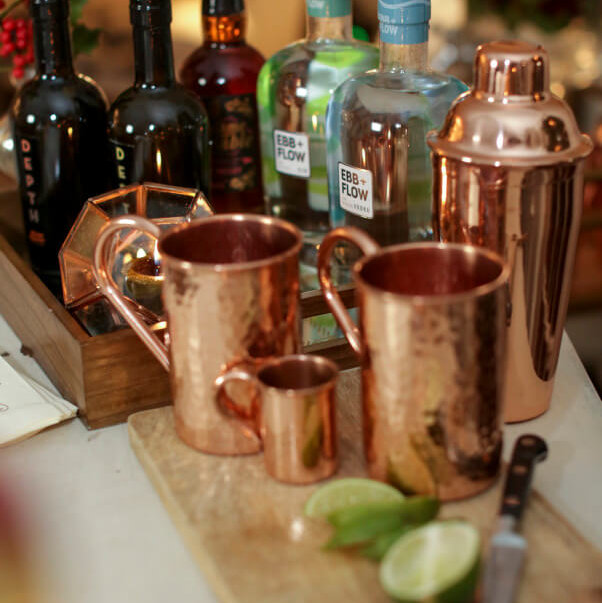 Copper Mug Co focus our business on wholesale and bulk sales to bring beautiful copper into the event, corporate and distilling industries. Nothing is more rewarding to the Copper Mug Co. family than to see our mugs being enjoyed by other passionate mule lovers at their events, restaurants, bars, receptions, and parties.

Get a Custom Quote

Everyone loved their favors

“Probably the easiest process of my wedding planning!”

I would HIGHLY recommend this company

“The mugs are beautiful and they’re “real deal,” unlike the lightweight, aluminum-lined “wannabe” mugs that you find elsewhere.”

“We now get to drink Moscow Mules out of these beautiful keepsakes forever… and so do our guests! Completely worth it!”

These were definitely worth the cost

“I wanted to find a wedding favor that our family and friends would want to take home with them at the end of the night. It turned out our mugs added a lovely element to our table settings!”

Product is great and people loved getting them as favors

“I needed extras very late in the process and they got them done for me and they arrived on time. I would definitely recommend purchasing from them.”

Ordered these copper mugs as a party favor

“They were great about solidifying a design and very open to input. They were fast, reliable, and a great quality.”

Couples Choice Award Winner
6 Years in a Row on WeddingWire.com

Why Buy in Bulk from Copper Mug Co.?

Many other copper mug manufacturers use copper blends, copper plating, or alternative metals. Why? Because real copper is expensive. But real copper enhances the drink and is what consumers should expect. Our mugs are made with 22 gauge copper. And when you can get bulk 100% copper mugs for the same price (or sometimes cheaper) than competitors knock-off copper mugs, why sacrifice quality?

A Wide Variety of Products

While we offer top quality copper mugs, we also offer a lot of other copper drinkware and barware. We have sold to bars that created an incredible vibe with many of our copper products, including our wine cups, tumblers, beer steins, straws, shakers, pitchers, ice buckets, chargers…you name it! And if we don’t offer it now, we are happy to custom-design whatever you can dream up. Check out our product page for existing products, and contact us directly if you want us to build something custom for you.

We Control the Manufacturing Process

At Copper Mug Co., we control the manufacturing process from initial design all the way through delivery. This means you’re not dealing with “wholesalers” who simply act as middlemen for other manufacturers. Because we control manufacturing, we can truly offer factory direct wholesale pricing and the highest quality mugs on the market.

All our handles are welded onto our mugs – not finished with rivets like some of our competitors. Welded handles provide a stronger attachment, don’t puncture the mugs (which can cause leaking over time), and have a more finished look than rivets.

All our bulk mugs come coated with a food-grade lacquer to ensure the mugs resist tarnishing and the appearance of aging. This helps protect your investment and means you can use these mugs for years to come. We always recommend hand washing and drying copper drinkware. If you prefer the look of the original shine, a little copper cleaner does the trick.

With every bulk order, we offer free engraving of your logo or message. Most other manufacturers charge an initial set up fee as well as a per-mug fee for engraving. Since we control the manufacturing process, we can offer this service free to our customers.

And we do actual engraving, not screen printing. Cheaper competitors offer screen printing which eventually washes off with use. Our engraving will last forever – even with the daily washes required in bar or restaurant usage.

*Due to economics, our free engraving is available with any order with 100 mugs or more. If you’re ordering less than 100 mugs, reach out to us and we’ll see what we can work out.

Get a Quote For Wholesale Copper Mugs

Do you need a lined mug to comply with local regulations? We can do that. How about a hammered mug instead of a smooth mug? Or maybe you need a particular shape or size. Want stainless steel or brass instead?

We can do all those customizations and more at wholesale prices.

Please reach out to our team for a free quote on your copper mug order. We’ll get back to you within 24 hours.

Fill out the form below for a custom quote!
All inquiries receive a response within 4 business hours
(Monday – Friday 9am-4pm Mountain).

What to expect after submission:

Your personal customer service rep will guide you from order inquiry to delivery.
You’ll also receive a price quote, current lead time, and information on how to move forward with your order.

We recommend placing orders at least 6 weeks in advance.  Rush options are available for an additional charge.

Wait – but where did the copper mug come from?

Many people who first hear the name, Moscow Mule, tend to assume the drink dates back to its Russian roots. However, its origin story isn’t that simple.

The origin story can be traced back to the 1930s Sunset Strip in sunny California. A man named John G. Martin, had purchased an unknown vodka distillery, called Smirnoff (sound familiar?). He was having an incredibly difficult time selling his vodka, resulting in a surplus of product. After all, Americans were more interested in whiskey and beer during this time.

Martin had complained to his friend, Jack Morgan, who happened to be the owner of a bar in Hollywood, called the “Cock ‘n’ Bull.” Turns out, Morgan faced the same problems in trying to sell his ginger beer.

Sophie Berezinski, a russian immigrant arrived in America with 2,000 copper mugs – a surplus from her father’s copper factory in Russia. She walked into the Cock ‘n’ Bull bar in Los Angeles with the intention of selling her supplies. After meeting Morgan and Martin, the three discussed ways to merge their products and tackle their surplus woes.

The rest, they say, is history.

Get In Touch with Us

Get the latest news